WGSA member David Moore’s feature film, “Snaaks Genoeg” will open in cinemas in October 2016. “Snaaks Genoeg” is a dark comedy that follows a down and out comedian who drifts from one small town to another, while big name Comics are being murdered in bizarre ways. The film stars Casper De Vries and Tobie Cronje. David was part of the delegation that jetted off to the London Screenwriters’ Festival in the UK last month. He had this to say about the film, “Although I’m terrified, I am happy to have achieved this. The movie is aimed at a specific audience with a specific message and is a lot of fun. I am proud of it and still laugh, cringe and smile all the way through”. The film’s premiere will take place at 18h30 on the 14th of October at Ster Kinekor Tygervalley, Cape Town. The WGSA would like to congratulate David and wish his film all the best of luck at the box office. To see the film’s hilarious trailer, follow this link: https://www.youtube.com/watch?v=5xUtEAt34aw&feature=youtu.be 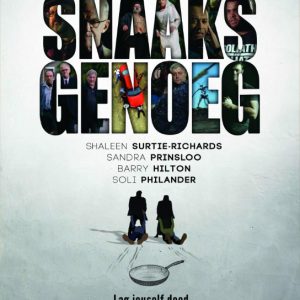