After recently being nominated in the Best Documentary category at this year’s Silwerskermfees, “Alison” was bestowed the top honour of International Humanitarian Platinum Award Winner for Best Documentary at this year’s World Humanitarian Film Awards. The film will now compete for overall winner. The film was written and directed by long time WGSA member, Uga Carlini. A special 16 days of activism screening will commence on the 25th of November at both the Labia theatre (www.thelabia.co.za) in Cape Town and the Bioscope cinema in Johannesburg (www.thebioscope.co.za/about/). The film had its international premiere at Dances with Films Festival in Los Angeles, where it not only got pick of the fest from Enclave LA, the hybrid film also made history by becoming the first South African film to be selected for this iconic film festival. Some of the other international film festivals include, the Cayman Islands International Film Festival. The film has also won a Best Documentary award at the Asia Pacific International Film Festival. Local highlights include ‘Alison’ as the opening film of the 2016 Mzanzi Women’s Festival at Constitutional Hill and being part of the official selection for the NFVF showcase of films in Honor of Women and Activism at this year’s Grahamstown International Arts Festival. The film is now heading for the Human Rights Film Festival of Barcelona, Paris and New York. festivaldecineyderechoshumanos.com/en/ Video: https://www.youtube.com/watch?v=x4dJgYPvrRA 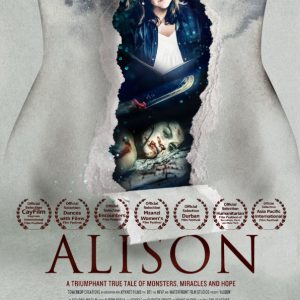