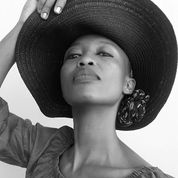 Theoline Maphutha is a Johannesburg-based screenwriter with 10 years’ experience in the South African film and television industry. This is her third term as Chair after helming the organisation in 2015/2016 and 2019/2020.

Her incessant passion for training and development led to the creation of the WGSA’s inaugural market readiness workshops in 2014, the introduction to screenwriting course (piloted in Soweto) in 2015, and the streamlining of the guild’s collections agency the same year, “so that writers can have access to their long-overdue repeat fees”.

Theoline has been campaigning for the formation of a Federation of African Guilds since 2015, and her efforts then set in motion the creation of several African guilds, the WGSA application to become a member of the International Affiliation of Writers Guilds (IAWG), (full membership status was awarded in 2016).

She holds a Master of Fine Arts in Screenwriting from the American Film Institute (AFI) in Los Angeles.