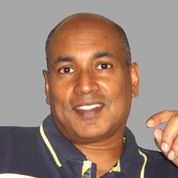 He is an award-winning writer, director and producer of both film and television. He has a Diploma in Directing and a Diploma in Cinematography from the Los Angeles City College Film School, where he also studied the History of Narrative Film. He won the prestigious Harley-Merrill Screenwriting Award in Hollywood. Eubulus has produced and directed major events for South African Embassies and Commissions around the world including the 10 Years of Democracy in Singapore and Tsotsi Pre-Oscar Party at The Beverley Hilton in Beverly Hills.

He was the founding chairperson of both the Cape Film Commission and the Durban Filmmakers Guild. He also started a Performance School in Cape Town – past students include South African Idol winner Heinz Winckler and actress Kim Engelbrecht.

He produced Cape Night Live, which introduced Mark Lottering to South African television audiences and has directed numerous short films, as well as the feature films Othello and Deep End.