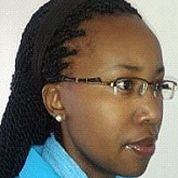 After training as a script editor through Sediba, she worked in the SABC Content Hub Drama department from 2006 to 2013, where she started as an Intern and finished as Acting Head of Genre.

In 2013 she moved to M-Net where she took up a position as Commissioning Editor, later working as a Story Development Consultant on Telenovelas. She was Creative Producer in the Female Filmmaker slate – 2016 & 2019.